Berlin, I love you and it’s good to be back! shouted Pelle Almqvist, frontman of the legendary The Hives, to the audience on Saturday night after an hour and a half of collectively bringing rock’n’roll back to Berlin with band and fans. There it was, one of those certain goosebump moments one had longed for so long. The fourth edition of the festival initiated by BMW Motorrad could hardly have been summed up in words more beautifully and precisely!

Fans and the community had to wait a long time for this moment. But all the waiting was worth it: Pure&Crafted, the festival for enthusiasts, celebrated its successful comeback in the capital on the Spree last weekend. It almost seemed like a small eternity since this unique event with its distinctive mix of handmade music, motorbike culture, and new heritage lifestyle last thrilled us in Berlin in 2017. Four years and a global pandemic later, we can see that the magic and charm still work and provide special moments.

The event’s new home, the Sommergarten at Messe Berlin, scored points right from the start. Many people in the first instance were only familiar with the name of this event-proven location. But the 6,000 or so visitors, exhibitors, artists, and everyone else involved was delighted with this little oasis in the heart of the City West. The character and concept of the Pure&Crafted Festival blended perfectly with the great ambience and impressive architecture. During the weekend, the area literally invited visitors to stroll and discover: the remarkable Palais hosted the General Store, where international exhibitors such as Bad and Bold, Bowtex, The Heritage Post, and Throttlesnake presented new heritage culture, fashion, and accessories at their best.

Next door, the most sincere motorbike culture was celebrated with passion in the Wheels Area. Here, customizers such as Hookie Co., JvB-Moto, and WalzWerk presented their latest creations while communities from The Motocycle Pow Wow to the Petrolettes guaranteed a great atmosphere and exciting insights into the motorbike scene. The impressive Ehrenhalle aka ’Hall of Fame‘ was also all about custom bikes: international customizers such as Zillers from Russia, Renard Speedshop from Estonia, and Ironwood from the Netherlands put on wheels truly breathtaking works of art. 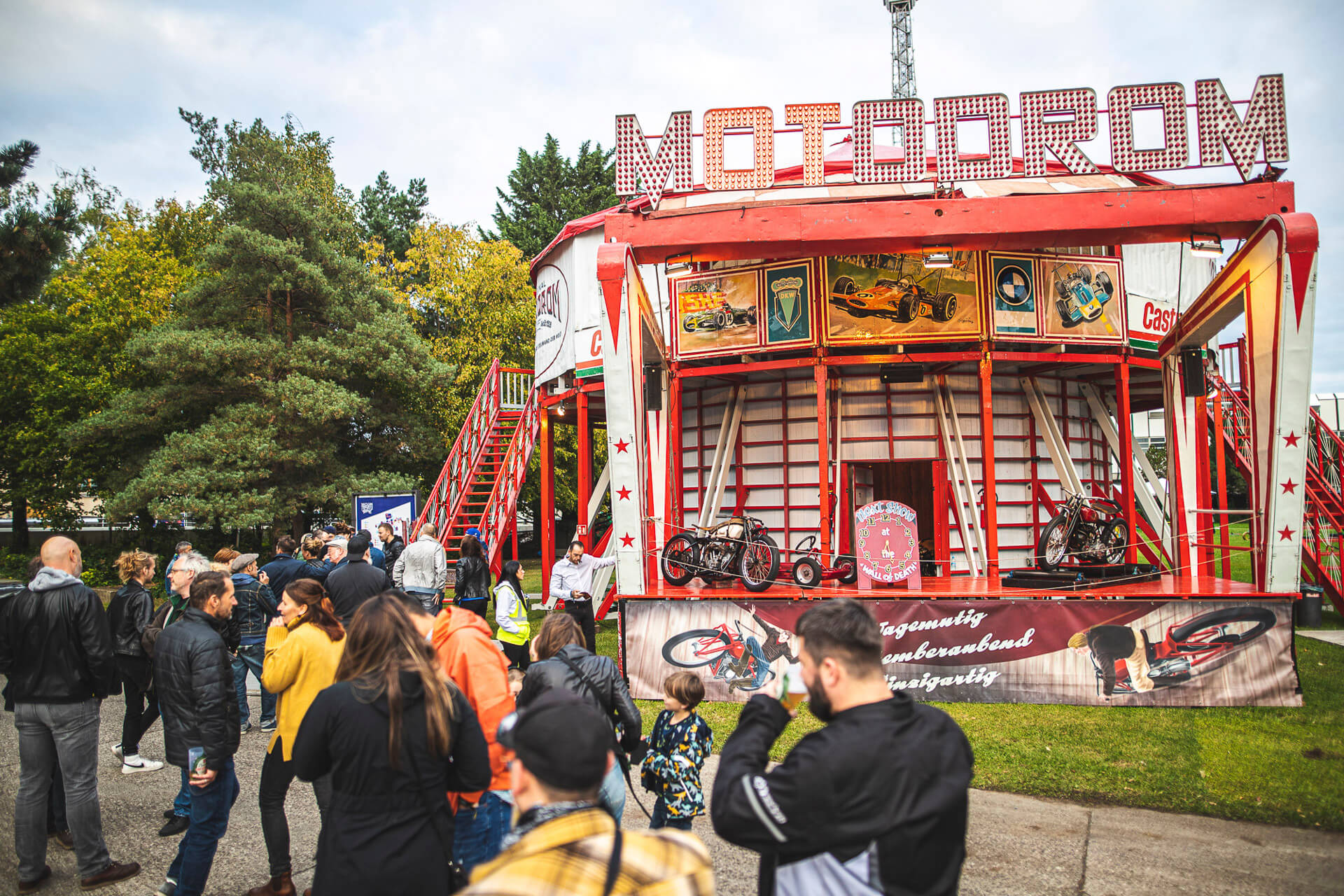 If you were looking for a real adrenaline kick, the Motodrom was the favorite stomping ground. Here, the Motorellos, led by ‘Captain Donald’ Ganslmeier, defied gravity in a breathtaking motorbike show and sometimes caused the audience to gasp. Right next door in the Kids Area the little ones could play and do handicrafts to their heart’s content. And of course, the bikers of tomorrow could also get their children’s driving license here. For those who wanted to experience great adventures on the big screen, the specially installed Pure&Crafted cinema was the place to be. Here, the Lisbon Motorcycle Film Fest presented selected motorbike films over two days. 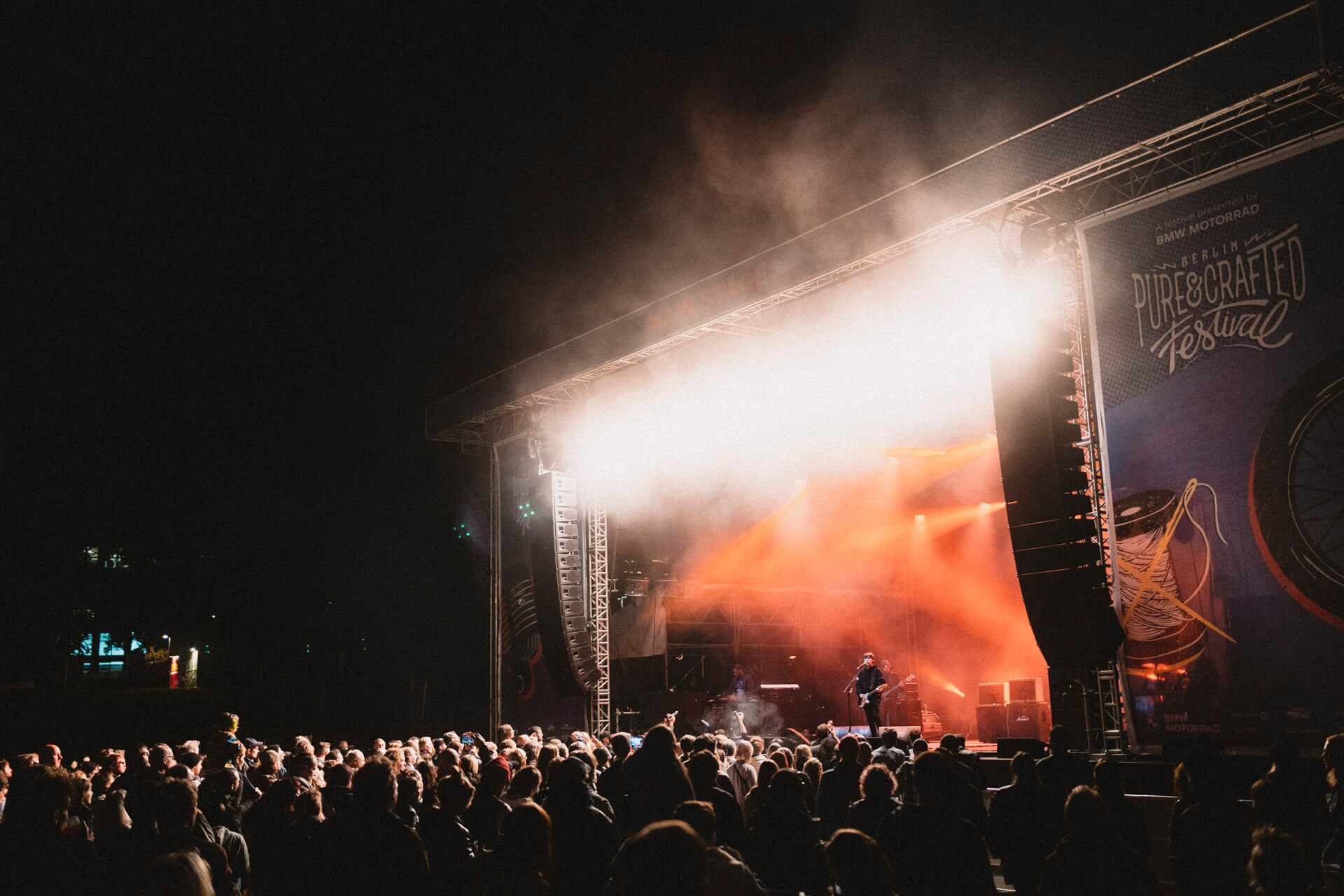 The heart of the Sommergarten was the Main Stage, where acts such as The Hives, Jake Bugg, Kadaver, and Alice Phoebe Lou were finally able to play live again, much to the delight and enthusiasm of the fans. At the same time, artists like Sofia Portanet, Jupiter Jones, and The Picturebooks played their way into the hearts of the audience on the 2nd Stage.

Certainly, the fourth edition of the Pure&Crafted Festival was a very special one for everyone involved. Not only because of the event’s return to Berlin, or because of the new location, but rather especially after the more than one and a half years that have passed, in which almost everything was different. With Pure&Crafted we managed to regain a bit of our former life, but above all it was a pleasure to bring people together in a relaxed and familiar atmosphere, to exchange ideas and inspiration, to simply enjoy the lightness of being.

We would like to thank all visitors, partners, participants, artists, sponsors, service providers, and helpers for their trust and support. Only with your participation, we were able to make Pure&Crafted possible in these times. Together with you, we were able to face the challenge. Now we are already looking forward to seeing you again in the summer of 2022 under the Funkturm!